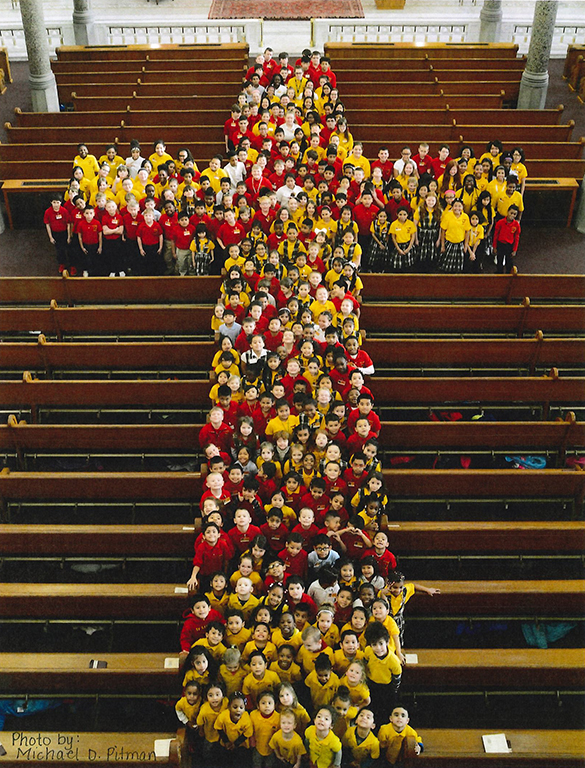 St. Lawrence is a Roman Catholic Elementary School committed to the spiritual, academic, and personal development of a diverse community of students. Inspired by the Gospel of Jesus Christ, we nurture students so they will become compassionate and confident life-long learners.

Led by principal Jen Long, St. Lawrence is one of ten CISE schools providing Catholic education within the Cincinnati area. To learn more about CISE and the impact they make on the lives of our youth please visit their site: www.cisekids.org 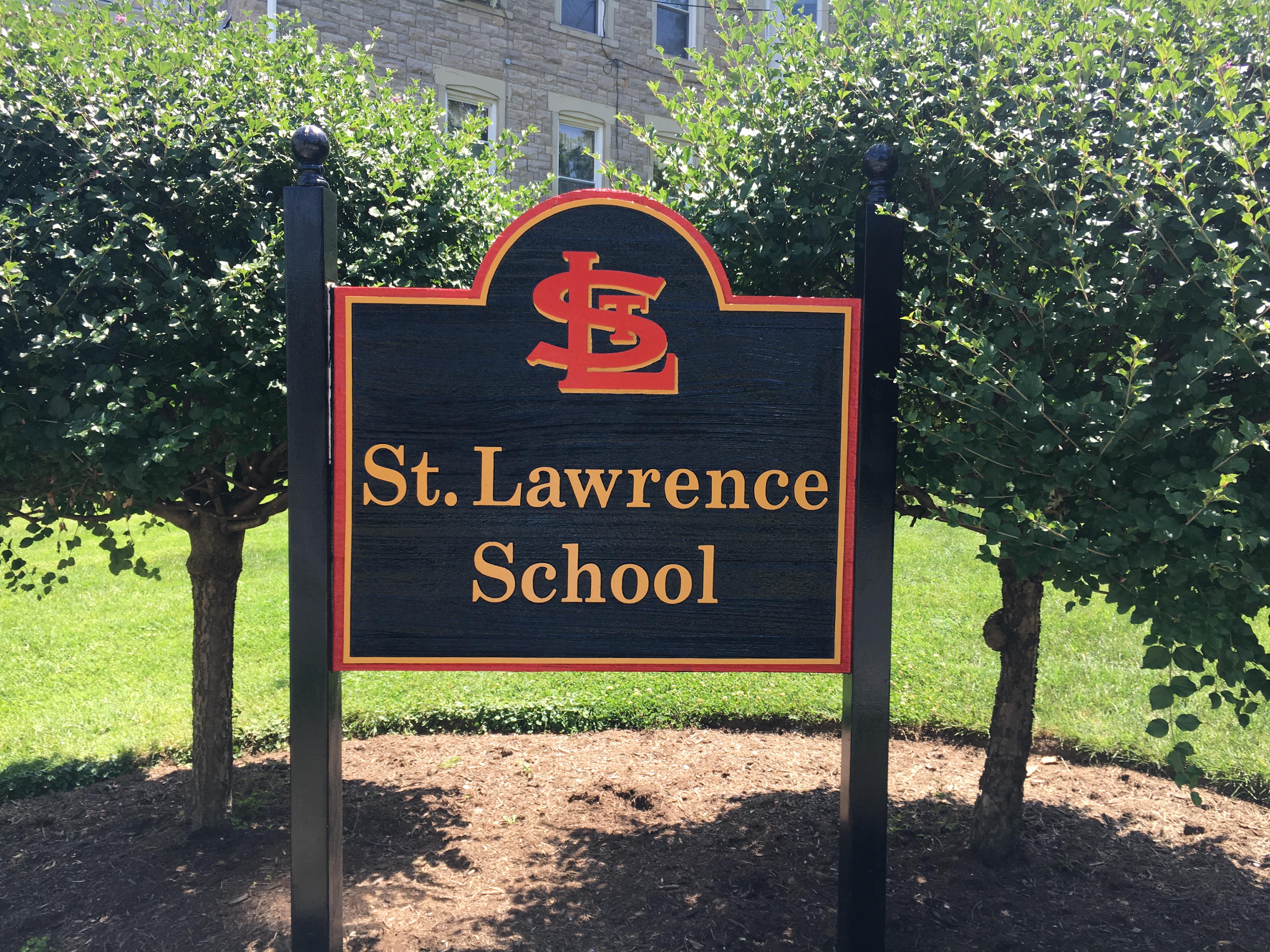 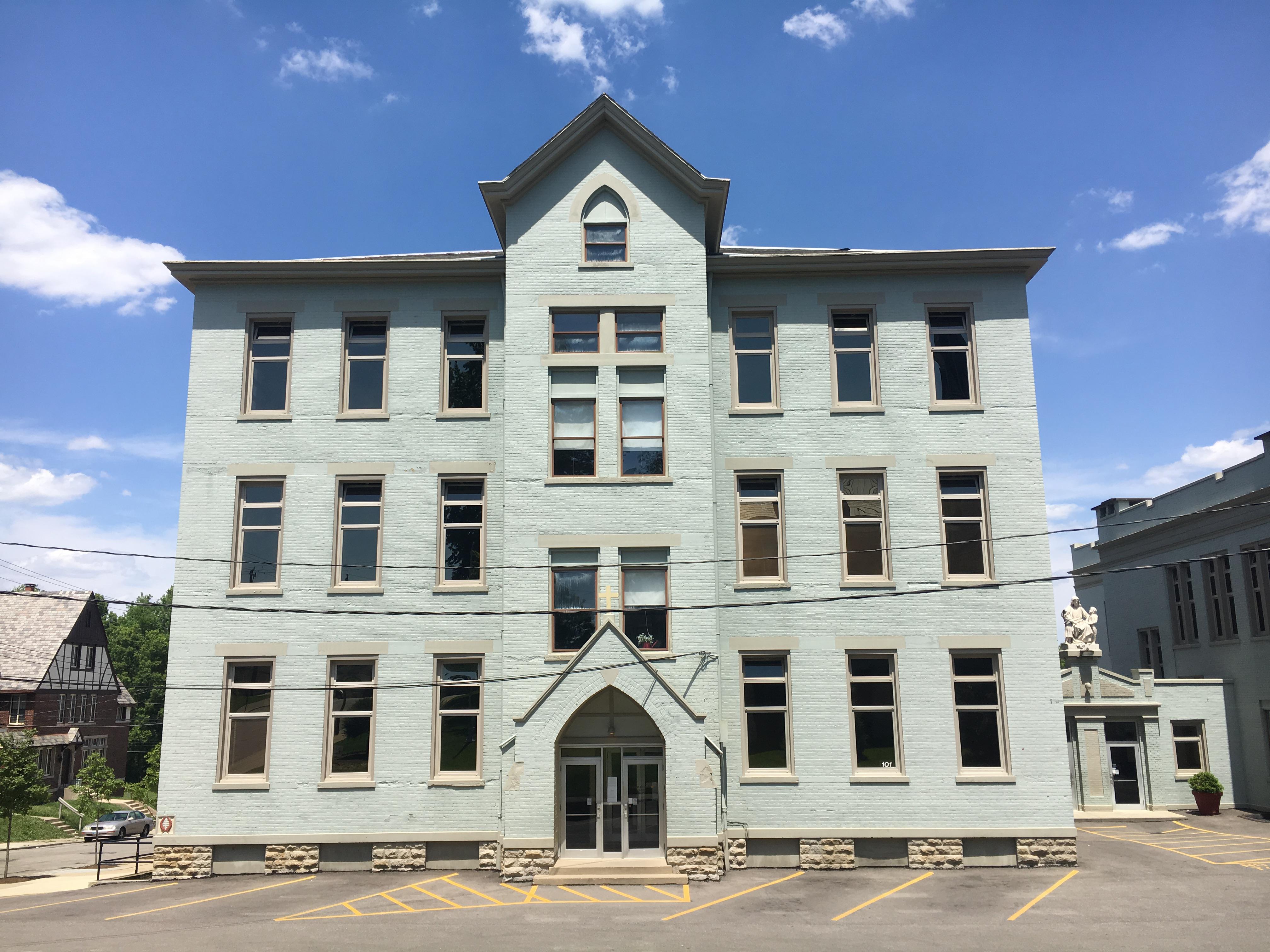 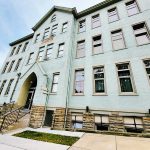 It was in September 1870, that St. Lawrence School first opened its doors to forty-five pupils. The school was situated on the first floor of a combined church and school building that stood on the south side of Warsaw Avenue and was staffed by two Sisters of Charity-Sister Ann Agnes and Sister Francesca. The following month, Sister Genvieve arrived to begin an assignment that lasted over twenty-five years.

The school flourished and in 1884 it was necessary to construct a gallery along the east and west side of the church to accommodate the growing number of children.

In May 1885, the pastor purchased the house contiguous to the school, completing the triangle between Warsaw and St. Lawrence Avenues, and paid $3,500.00. In September 1885, a classroom was opened in this house. Later, two classrooms were opened in the house for the lower grades.

When the new basement church, on the opposite side of Warsaw, was completed in 1887, the school took over the vacated church space and now consisted of five classrooms. In March 1892, the bell and tower were destroyed, and all the children escaped without injury. In 1895, the year Sister Genevieve and the school celebrated their Silver Jubilee with the parish, the number of students had grown to 361, and the school was remodeled. This still did not provide enough space, so two parcels of land were purchased in 1897. Once was a lot on Carson Avenue and the other was a house and lot adjacent to the school. This house was remodeled and used for two classes of about fifty pupils each.

Six years later, in 1903, the need for further expansion was recognized and enough land was purchased at Carson and Laclede avenues to build what the pastor and trustees described as “the finest school in the diocese.” It must have been with great and justifiable pride that this building was dedicated on June 21, 1905.

As Saint Lawrence was the mother church in Price Hill, so it led in the field of education. One of its chief glories is its interest in higher education, and Elder High School, a flourishing school today, was started in St. Lawrence Parish and was a pioneer in its field. It had its beginnings in 1912, in the old school building, and was staffed by the Brothers of Mary. As it grew, an addition to the grade school was built complete with an auditorium and gym. The entire structure was solemnly dedicated to “Our Lord Jesus Christ, Lover of Little Children.” We are still reminded of this dedication by the statue of Christ with a little child on each side, which was blessed and placed between the two buildings on the feast of Saint Lawrence, on August 10, 1917. The total cost of both buildings was $60,000.

By 1922 the “Elder High School” had one hundred and twenty students and was ready to occupy a building of their own on Iliff Avenue.

In September, classes were conducted for the first time at the new Elder High School (named after Archbishop Elder), although the main building was not complete. The boys and girls from eleven parishes in the vicinity attended this school and the numbers grew yearly, until finally in 1927, a gymnasium and additional classrooms were built at the old Cedar Grove Academy, now called Seton High School. The girls left Elder and went to Seton in September 1928.

Saint Lawrence was selected as a site for Diocesan Latin School which operated from 1940 to 1954. Its purpose was to foster vocations and develop a love of their religion in seventh and eighth-grade boys. These boys, selected from the entire diocese by a test, after two years of intensive study including Latin, entered High School in their Sophomore year.

An excellent kindergarten was conducted from 1947- to 1959 when a lack of funds forced it to close.

In 1964, all first-grade classes in parochial schools in the Cincinnati Archdiocese were abolished. This cut the number of students considerably so that in the 1967-68 school year, there were only 565 pupils enrolled in grades two through eight.

As we celebrate decades of history of the parish and the school, the parishioners can feel that St. Lawrence has kept in step with the times. Modern methods of instruction are used and innovations are constantly being made to insure that children receive a first-rate education. Among the newer additions are two extensively equipped and attractive libraries-one for the primary grades and one for the upper classes. Under the expert direction of the Sisters of Charity and the lay teachers, St. Lawrence graduates are equipped with the knowledge and values to succeed in this world and the next. It is difficult to condense the history of a century-old institution into a few short columns without eliminating the spirit that permeated it. But if we reflect upon the world of H. G. Wells which state that “human history becomes more and more a race between education or catastrophe,” we may begin to appreciate the contribution St. Lawrence School made a society.